Few things say “comfort food” to me louder than rice pudding. Now let me make it clear that just any rice pudding will not do. I have had a creamy, rice-y dessert at cafeterias, and tried the packaged products sold in supermarkets. These bland, sloppy imposters are not for me. THIS rice pudding, no less creamy, but with body and flavour, and a thin film of cinnamony crust is the only one for me. When my mom made this recipe for our large family she (at least) doubled it, first cooking the rice in the famous large copper-bottomed pot and baking the assembled pudding in her (also famous, family-wide) red Pyrex bowl. This bowl is now in the custody of my youngest sister, but I have had the good fortune to have found its mini-me at a garage sale. It is fully capable of holding the single recipe, which is just right for the two of us, with leftovers. 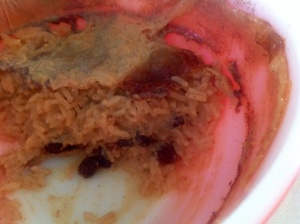 I watch a lot of TV.

Our House Has Wheels

Not Another Tall Blog

Not just another tall blog. Because being tall is NOT all we talk about! Follow me for tall talents, tall fashion, rock interviews and more!

News from our Big Blue Farmhouse